Phuket is the most popular tourist destination for people worldwide since there are many beautiful Thai sea landscapes with pleasant and abundant nature. At the same time, Phuket is a city full of fascinating ancient history and unique architecture, including Buddhist places such as Chalong Temple or Chaithararam Temple.

Chalong Temple has long been regarded as the temple of Phuket located in Chalong Subdistrict, Mueang Phuket District. However, no evidence specifies when the temple was built, but there is evidence of the existence of Chalong Temple during the reign of King Rama 3. Later, King Rama V changed the name to Chaithararam Temple because, at that time, the temple had Luang Por Cham or Phra Kru Wisutwongsajarn Yanmunee as the abbot.

He is famous for the treatment of diseases for villagers. He is a monk who has science in concocting various herbal medicines that can cure diseases and make a splint for patients with fractures. In addition, in the era of Rama 5, a group of rebels wanted to occupy the island of Phuket. Thus, Luang Por Cham, therefore, gathered the villagers to fight by giving a white cloth to the villagers to use as a turban to raise morale and encouragement.

Finally, they could fight the rebels until they were eventually victorious. After that, King Rama 5 announced a title to Luang Por Cham and bestowed the temple’s name to be auspicious.

There are also stories of miracles about Luang Por Cham that Phuket people have mentioned many times. For example, the miracle of gilding wood that Luang Por Cham asked a young girl to attach the gold to cure her stomachache.

Many people said that this stick can cure a child with a hernia, an abscess, or birthmark, then, these symptoms will disappear. Although Luang Por Cham has passed away for more than a hundred years, people in Phuket still have faith in him. The temple had built a cubicle that mimics the Thai-style house that Luang Por Cham used when he was alive. Inside, there is also a wax statue-like Luang Por Cham for tourists to pay respects.

The two monks do not have only beautiful ethics and can perform the monks’ duties very well. Both also contribute to the temple in restoring various buildings and structures of the temple to become a beautiful place. Besides, they have been revered by the people of Phuket or even the Buddhists in Malaysia unfailingly. Visitors can pay homage to 3 Luang Por at the temple’s sanctuary.

In Chalong Temple, there is also Phra Mahathat Chedi. Phra Jom Thai Baramee announced that he has received a lot of faith from visitors because the Buddha’s relics are enshrined, which used to be contained in a pagoda in Anuradhapura was the former capital of Sri Lanka.

However, there is a history that the abbot Samphothihan Temple Sri Lanka has given this relic to Chalong Temple. The temple, therefore, built Phra Mahathat Chedi. His Majesty the King announced to contain the Buddha’s relics in 1998-2001 Inside Phra Mahathat Chedi.

With a long history about the faith and devotion that Buddhists, both Thai and neighboring countries, have had for Chalong Temple or Chaitharam Temple for a long time.

This makes this place considered a place where visitors to the province should not miss visiting once. In addition to the sanctity of the three monks, this temple is also full of beautiful contemporary Thai architecture that is worth a visit. 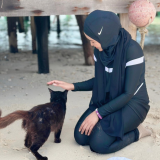